Founded in 1970 in a small space across the street from the University of Pennsylvania, Urban Outfitters originated as a unique retail experience and community center for creative, college-age customers. Within a few short years, the first UO had grown into a small department store with an expanded product offering and additional elements, creating a greater community experience complete with restaurants, music and places to hang out. Today, Urban Outfitters has over 200 stores in the United States, Canada and Europe, offering experiential retail environments that combine a curated mix of women’s, men’s, accessories and home products with an eye toward creativity and cultural understanding. The idea of Urban Outfitters’ being a place for like minded creative individuals and as a creation of community spaces continues today. Urban Outfitters has shared their customers’ interests and values, representing community at all times by offering inclusion in social media, events, community involvement, and entrepreneurial opportunities. 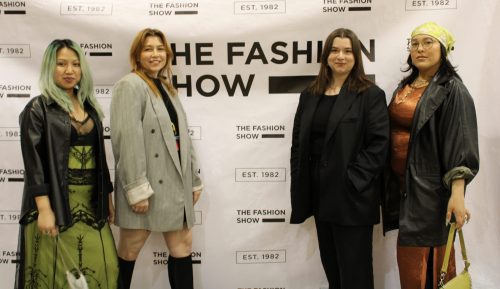 We are thrilled to announce our Guest Judges for The Fashion Show 2022! Please contact Design if you have any questions.

Kathleen Heiden received her Ph.D. in Family and Consumer Sciences Education from Iowa State University in 2007. She is currently an Associate Professor and Program Development Chair in Fashion Merchandising and Retail Studies at Louisiana Tech University. Her position has also included conducting research. Her research has included effectiveness of case studies for student learning, textile performance, bullying, using simulations for changing attitudes, social implications of appearances, and body image. She is currently involved in a research project that looks at consumers’ sustainability knowledge, and the relationship between their fashion and food practices. One of her proudest career accomplishments while working at Louisiana Tech includes designing the “Tech Tartan”, a brand that incorporates a tartan plaid that represents the school’s legacy and traditions. She also developed the “Louisiana Tech Career Closet.” The Career Closet provides current students who are preparing for careers with knowledge of appropriate professional dress and access to professional dress and professional headshots at no charge. Heiden says that her favorite part about working as an educator is the opportunity to mentor students. Heiden describes that, “mentoring to me is investing in students by pushing them in ways they don’t think possible, developing a passion within students for their profession, and by believing in them when they may not believe in themselves.” Heiden previously worked for JCPenney as a Product Developer and Evaluator where she collaborated with brand development designers and pattern makers, buyers, suppliers, and catalog department to ensure children’s clothing, accessories, and shoes met company standards and governmental guidelines to ensure customer serviceability. While at JCPenney, she was awarded the Grand Champion Professional Apparel Design award twice for entering her own designs in an employee apparel design competition. She also has experience in custom sewing where she has designed and constructed bridal gowns, special occasion dresses, and clothing as well as home furnishings and draperies.

Christopher Dove received his Bachelor of Science in Apparel, Merchandising, Design, and Production with an emphasis in both Creative and Technical Design from Iowa State University in 2013. His love for product development began at the young age of six years old when his great-grandmother taught him to hand sew. This passion for design as a child has blossomed into a career for Dove. His career in fashion began as a technical design intern at Target for toddler accessories. He was offered a position to return to Target post-graduation as an assistant technical designer in kid’s apparel. He then worked as an assistant technical designer for women’s woven tops at White House Black Market and later went back to Target as an assistant designer in handbags. He has helped to create brand principles and launch numerous new Target brands that are trend forward and guest centric. He is currently the Senior Designer of Women’s Accessories at Target, leading the design vision of handbags, wallets, and belts. His favorite part of working in the fashion industry is “seeing your designs on real people in the wild. You never forget the first time you’re out to dinner or shopping and see someone wearing something you designed.”

Anya Caboth received her Bachelor’s of Science Degree from Iowa State in Apparel, Merchandising, Design and Production with an emphasis in Technical Design. Anya currently works as a Technical Designer on the Women’s Lifestyle team at Nike. Her role is to take the designer’s vision and work with their factory partners to bring it to life. She creates tech packs, builds, and advises on patterns, runs fittings, and approves samples. She loves that her job allows her to travel internationally and build relationships with people from all walks of life. One of her favorite parts about working in the industry is that she gets to surround herself with fun colors, interesting patterns, and creatively minded people. Anya became interested in apparel as a child when she learned to sew at a young age and found it as an enjoyable creative outlet. She didn’t realize until visiting Iowa State in high school that she could take her passion for apparel and make it into a career. She has had experience working with large companies like Nike and Reebok and smaller companies like Tilly’s and Pair of Thieves. When asked what her proudest career accomplishments were, she said, “I could answer this question by talking about celebrity collaborations or million-unit sales volumes but those aren’t really what have made me proud. I’m proud to have turned my degree into a career that I find fulfilling. I’m proud to have worked for both small and large companies, companies that are international and companies that are philanthropic.” Anya truly loves that life is never dull in the apparel industry.

Amanda Hendricks received two Bachelor’s Degrees from Iowa State University. One degree in Apparel, Merchandising, and Design with an emphasis in Apparel Merchandising, and the other in Advertising. Amanda’s current role is a Senior Director of Merchandising at Ralph Lauren. Growing up, she always had an interest in clothing and how it made her feel. She didn’t realize she could make a career out of it until she got to Iowa State. What continues to interest her is how something most people think nothing of, is actually a major business that we rely on every single day. In high school and college, Amanda worked at a local boutique in Des Moines, which is what sparked her interest within the industry. She also interned with Diane Von Furstenberg within the visual merchandising department. After graduation she moved out to New York, first working at a retail store in Soho, called C. Wonder, which taught her a lot about the landscape of a New York City retail environment. She then landed at Ralph Lauren, where she has been able to grow within the Polo Merchandising team. Her favorite part about working in the fashion industry is the people and the creativity! Each day her team has to challenge themselves to think differently and creatively in order to stay ahead and build a stronger business.

Erin received her Bachelor’s Degree in Apparel, Merchandising, and Design from Iowa State University in 2004 and is currently the Vice President of Digital and Customer Experience for SMCP. In this position, she oversees all digital business in the Americas for Sandro & Maje, including their own sites and marketplace partners (such as Saks.com, Bloomingdales.com, etc.). Along with their e-commerce, she also oversees their customer relationship management and customer data department, working closely with the retail team. In regard to her past roles within the industry, all of them have revolved around the digital business, starting in buying and merchandising in addition to managing the sites. She also spent a few years in product development while at Steve Madden, Nina Shoes, and Club Monaco/Ralph Lauren. Prior to joining SMCP, she worked at Zadig & Voltaire where she was the Senior Vice President of Digital & Brand Marketing. Erin first became interested in the fashion industry in high school on a class trip to France when she realized that she was the only person who knew who designers were when they were passing boutiques on the street. The first time she knew she could make fashion a career was at Iowa State. She came in as a psychology major, but during orientation after speaking with an advisor she was introduced to the concept that fashion could not only be a major but a serious career as well. After that, she switched majors before classes started that fall. Some of Erin’s proudest achievements within the industry include hiring and developing talented employees and seeing them excel in their careers over the years. She has also had the opportunity to be part of Paris & New York Fashion weeks while she was head of Brand Marketing at Zadig & Voltaire. She says, “It’s absolutely exhausting but a great feeling when you pull off the impossible.” Lastly, her favorite part about working in the fashion industry is that it’s always innovating, and she can work with creative people who all think with different parts of their brain.

Stay up to date!

Every year, students have opportunity to showcase student designs in the Iowa State University Fashion Show. It's one of the largest student-produced and promoted events in the nation with Producers, Directors, and Committee Members, totaling around 130 students!